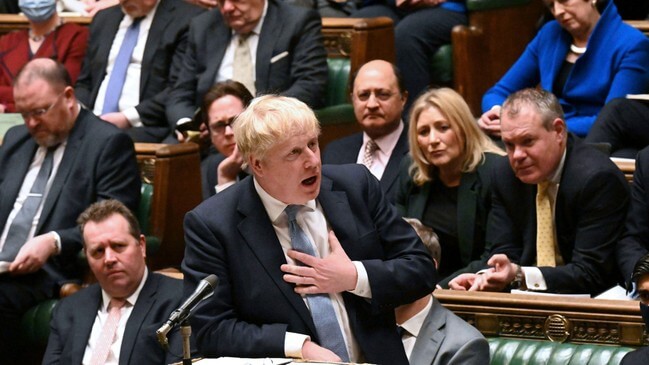 Below is a damning analysis of our current political/economic situation by a respected Professor of Clinical Psychology at Sheffield University.

He should know and believes that our Prime Minister is a psychopath and unless we all wake up to the fact that they tend not to change but get progressively worse if not challenged and stopped, Democracy as we know it, albeit not perfect, is under threat of pathocracy!

Pathocracy is arguably one of the biggest problems in the history of the human race. History has been a saga of constant conflict and brutality, with groups of people fighting against one another over territory and power and possessions, and conquering and killing one another. Surveying the course of human history from ancient times to the 20th century, the historian Arnold Toynbee spoke about the “horrifying sense of sin manifest in human affairs.”

1/ IMHO the UK now faces a crisis that is, in some ways, even greater than the one we faced when confronting Hitler. In WW2 at least we had politicians of integrity, who upheld our democratic values, and around whom the nation could unite. There was no enemy within.

2/ Today, the enemy of the people is the government itself which has become, as @Peston has noted, an elected dictatorship. Its crimes are so numerous that it has become difficult to remember them all.

3/ It isn’t just #Partygate. Remember the proven corrupt process by which PPE contracts were awarded to Tory friends during the pandemic, and also remember the £billions lost to fraud.

4/ Remember that much of the PPE – procured in a way that gave vast profits to Tory mates – has had to be thrown away as not fit for purpose. That’s your money – taxpayer money – that has been stolen.

5/ Remember the persistent failure of government to act, especially in the early phases of the pandemic. Johnson flounced around, avoiding COBRA meetings, and people died. They didn’t get the big calls right – they got them wrong.

6/ Remember the scandal of Russian money funded into the Tory Party, a suppressed Russia report, and the appointment of the son of a KGB officer to the Lords against security service advice.

7/ Remember the ‘small matter’ of £850/roll gold wallpaper. Johnson said he had no idea who paid for it and then it turned out (in a Whatsapp message Johnson had mysteriously forgotten about) he had asked Lord Brownlow to pay for it.

8/ Remember also that the architect of this shitshow has previous – funnelling taxpayer money to a woman he was screwing while his wife was suffering from cancer; wasting more than £40 million on a garden bridge project cooked up with his friends.

9/ The time has come to face up to some salient facts about the current situation and the magnitude of the danger we now face.

10/ First Johnson. As a psychologist I don’t normally use diagnostic labels on people I’ve not met but it’s clear Johnson is a psychopath. He meets most of Hare’s criteria on the internationally recognized psychopathy checklist, which uses biographical data (look it up).

11/ A parallel concept from the political science literature is ‘social dominance orientation (in my field it’s unfortunately common for people with different specialties to come up with the same or similar concepts and give them different labels).

12/ High SDOs need to dominate and know no moral boundaries. For a good summary, read/listen to Bob Altermeyer’s free (audio)book ‘The authoritarians‘. It will chill your bones (old Bob is a great narrator BTW).

13/ Importantly, high SDOs know exactly which buttons to press to manipulate ordinary people who have authoritarian tendencies (people Altermeyer calls ‘authoritarian followers’), who constitute about 30% of any country.

14/ How Johnson got that way is not hard to speculate. From school reports at Eton he was showing the traits early on. From Tom Bower’s biography it’s clear that many of his childhood experiences could be politely called ‘suboptimal’.

15/ The point is that (except with years of therapy – unlikely) psychopaths don’t change. The best predictor of their future behaviour is their past behaviour.

16/ Johnson has betrayed every person who has ever loved him, every child he has ever sired, everyone who has ever employed him (including 2 PMs). He has been fired twice for lying. In the end, he will betray everyone in the country.

17/ The problem of having a psychopath running the country is not just the psychopath. It’s the fact that psychopathic behaviour becomes contagious – he appoints other unprincipled people around him; they copy his style. The result is a PATHOCRACY.

18/ Which leads me to the threat to democracy. Because serial lying is one of the defining characteristics of a psychopath, we have a government of liars. The British system has weak checks and balances, and the constitution is unwritten, so democratic standards are destroyed.

19/ Be of no doubt: THIS COULD END VERY BADLY. In a pathocracy, the government will break every convention, bend every rule, lie and cheat to hang on to power. (Hence, their naked refusal to follow constitutional convention on misleading Parliament).

20/ The point is that psychopaths/high SDOs DO NOT THINK THE RULES (any rules) APPLY TO THEM. At best, expect lying on an epic scale in the run-up to the next GE. At worst, expect underhand tricks to activate authoritarian followers, and to deter some people from voting.

21/ Unless stopped, the best we’ll end up with will be an Orban-style elected dictatorship in complete control of the media (it’s no coincidence they’re emasculating Channel 4); at worst the complete subjugation of Parliamentary democracy.

22/ I’ve avoided mentioning Brexit thus far (everyone knows it’s an obsession) but I should point out that this is where the lies started and that it was the vehicle by which we ended up with this pathocratic government.

23/ What is to be done? It is five minutes to midnight but it is not too late. BUT THOSE ON THE SIDE OF TRUTH AND DEMOCRACY NEED TO GET THEIR SHIT TOGETHER PRONTO.

24/ First, the surest way of getting rid of this threat to democracy is for progressives, WHO ACTUALLY ARE A MAJORITY IN THIS COUNTRY, to build an alliance. That means @UKLabour, @TheGreenParty and @LibDems.

25/ I’ve heard all the arguments against a progressive alliance and none of them hold water when judged against the threat we face. There are many ways of doing it BUT IT MUST BE DONE.

FIGURE IT OUT FOLKS!

26/ A progressive alliance must be linked to constitutional reform. IMHO FPTP is at the root of many of our problems; it facilitates elected dictatorship and it stifles new, young political voices emerging outside the two-party system.

27/ Something also needs to be done to make the constitutional conventions binding. If a PM can be proven to lie to Parliament he should get his marching orders, without a doubt.

28/ The second thing we must do is get out young adult voters. They have been shafted by the Tories (astronomic and increasing uni fees; less job security than their parents; EU rights taken away; home ownership a distant dream). They hate the Tories for good reason…..

29/….but they don’t vote. How do we get them to vote? I don’t know but progressives in this country need to figure this out and fast. Do we campaign in unis? Do we find more people like @Femi_Sorry who can reach out to them and inspire them?

31/ I’ve written an analysis of this before. TL:DR the public is open to the idea of a closer working relationship with Europe. A BETTER DEAL WITH EUROPE IS A VOTE WINNER.

32/ So opposition politicians, particularly in @UKLabour need to do some hard thinking and get their Brexit story right. Because the Tories are going to try to use Brexit as one of their authoritarian-activating tricks in the next election.

33/ @UKLabour just saying they support Brexit as it is won’t work, IMHO. It sounds disingenuous. But saying we will reverse Brexit will play into Tory hands. A better deal with Europe, correctly explained, is the right approach.

34/ What to do about the @Conservatives? It’s time to recognise that the Tory Party is actually dead, as I’ve tweeted about before:

35/ At some point, decent Tories (there are some) are going to have to do something to restore their party and root out the racist, nationalist entryists who have taken over. It will be a tough job.

36/ So that’s my rant for today. I’m so damned angry at the bastards who are destroying my country. IMHO the time for civil disobedience in near; we are at the last chance saloon. The country may not survive.

Footnote #1. Yesterday I predicted that the psychopaths in charge will do anything to activate their authoritarian followers. No step will be too low. Today they announced this:

UK to send asylum seekers to Rwanda for processing

A quote from the American historian (and Russia expert) Timothy Snyder seems pertinent:

In either case what is your opinion; comment below!

PrevPreviousWhat are governments for?